Hedwig Krause from Bad Flinsberg and a car accident

On September 12, 1926, Hedwig Krause, a 33-year-old resident of Bad Flinsberg (Świeradów-Zdrój), the wife of a butcher’s master, dies in a car accident on a bend leading from Seidorf (Sosnówka) to Baberhäuser (Borowice).

There are many articles about the stone commemorating the tragic event at Liczyrzepa Street. But there is nothing about Hedwig herself – who was she? Where was she from? It turns out that there is an interesting story behind the monument.

Hedwig Krause from Bad Flinsberg (Świeradów-Zdrój – but is it really? Hedwig was not born in there. She also did not die on the day of the accident, on September 12, as the inscription on the monument commemorating the event states. It is unknown what happened exactly, whether she was run down or there was a collision between two vehicles, or the driver lost control over the steering wheel – but it is certain that Hedwig did not die on the spot.

She was transported from the place of the accident to the hospital in  Hirschberg (Jelenia Góra), where the death was confirmed the next day, September 13, 1926, at 11:00 p.m.

Hedwig did not come from Bad Flinsberg or Seidorf or from any other nearby town. She had lived in the vicinity of the Jizera Mountains for at least 6 years because on January 20, 1920, she got married in Bad Flinsberg. Her husband was the butcher Wilhelm Gustav Krause, 16 years older than Hedwig.

Hedwig Emilia Minna née Schulze was born on June 2, 1893, in a town 200 km away from Flinsberg – in Frankfurt on the Oder. She was the daughter of a butcher’s master, Richard Schultze and Minna née Frikel, who lived even further away, in Küstrin (Kostrzyn nad Odrą). Richard and Minna lived in the Old Town in the house at number 115. However, there is no trace of the house today apart from a few bricks and a piece of the foundation that have survived. But certainly, nothing more because the Old Town of Kostrzyn, called by some the Pompeii on the Odra River, was razed to the ground in 1945.

The groom, rather older than younger, as he was 43 on his wedding day, was born on December 11, 1877, in Bad Flinsberg. He lived in house number 149, probably on Hauptstrasse (today 11 November Street), according to the information from the address book dated 1930. Gustav was the son of the glazier Erdmann Krause, who started renting guest rooms at the end of his life in his house in Schreiberhau (Szklarska Poręba), and Augusta née Männich. 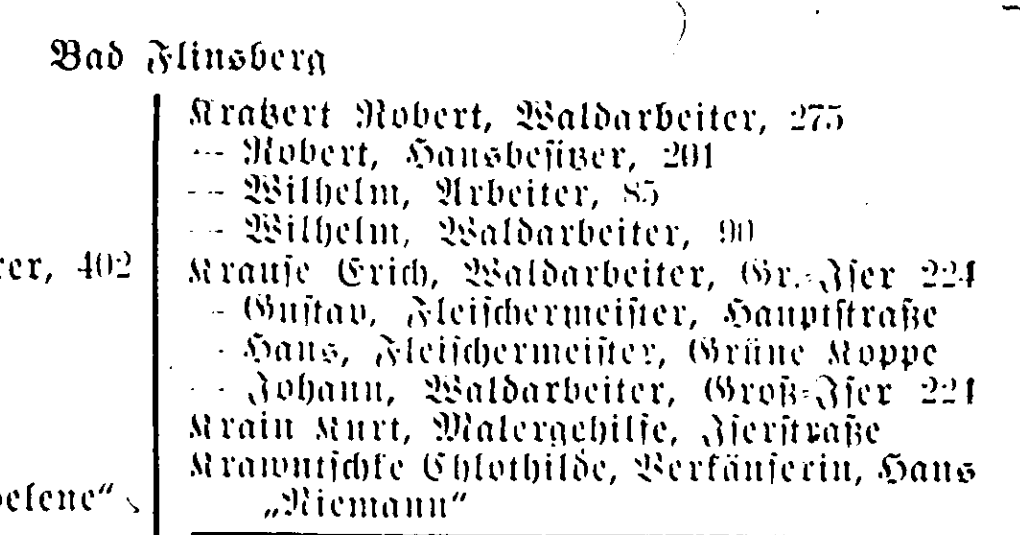 A piece of address book from Bad Flinsberg, 1930 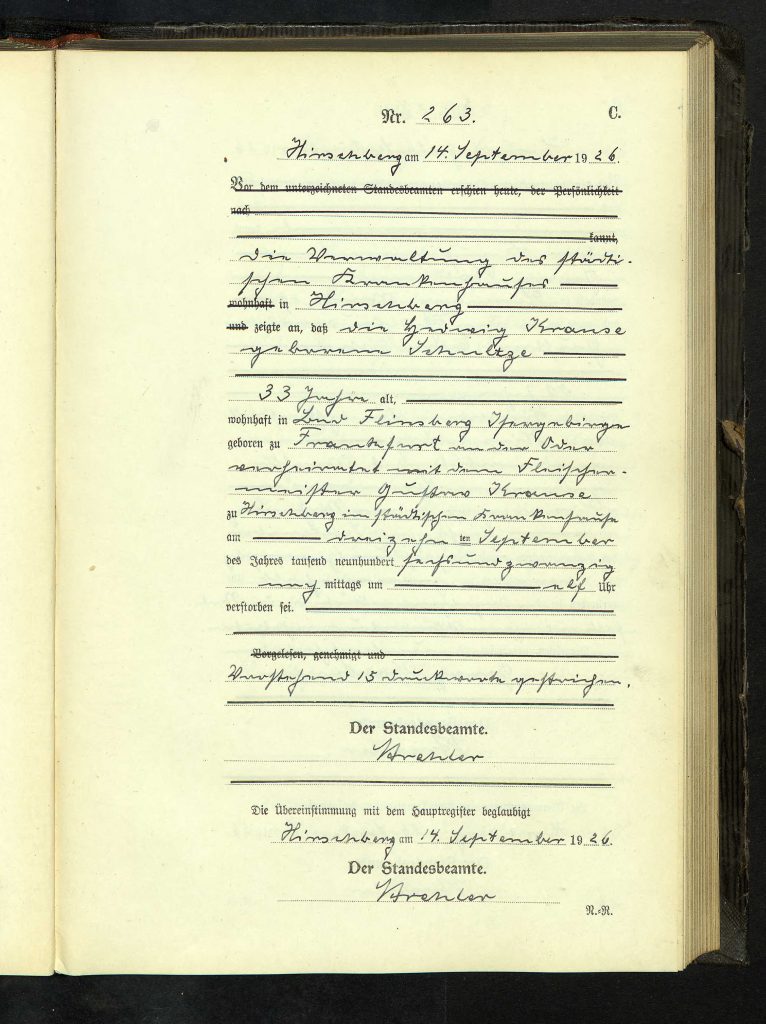 On November 12, 1917, Anna Krause née Günter, reports to the Registry Office that her mother, Auguste Louise Krause née Männich died the day before at 11:00 a.m. in her house at number 98 in Schreiberhau. She also added that Auguste was 74 years old and was born in Gross Iser as the daughter of Johann Traugott Männich and Johanne Friederike née Hoffmann. The daughter of Johann, the owner of the mill and a house in Gross Iser. And as it turned out later – the founder of the now non-existent Isermühle shelter in the former settlement of Gross Iser.

In 1874, Auguste, Erdmann and their newborn son Julius stayed with their grandparents in this small village in the Jizera Meadow. Later, however, they will move first to Bad Flinsberg and finally to Schreiberhau. 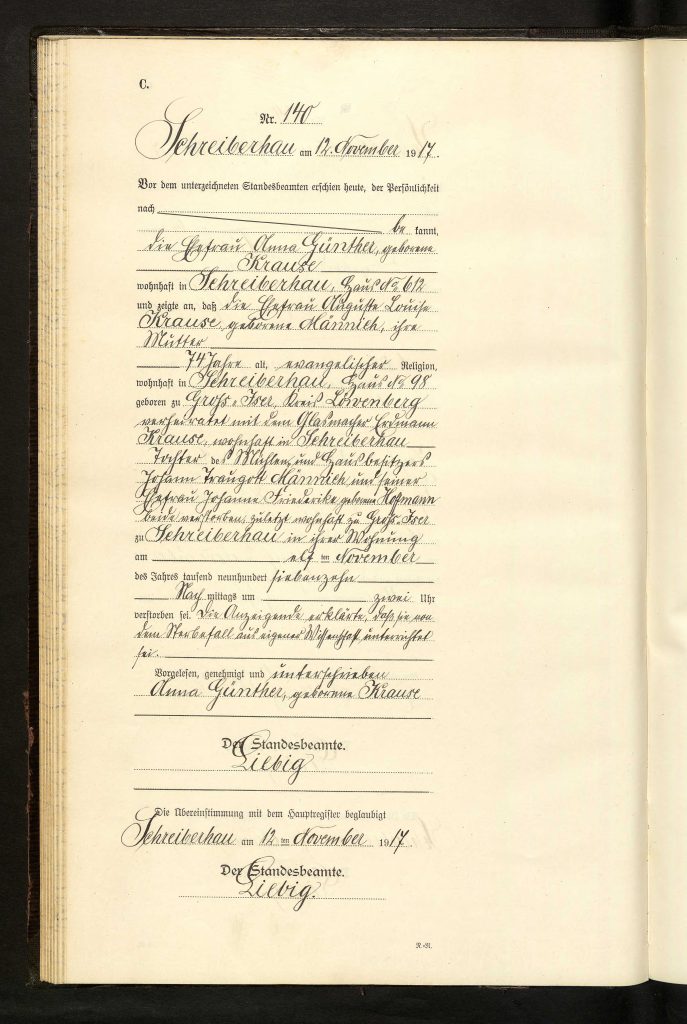 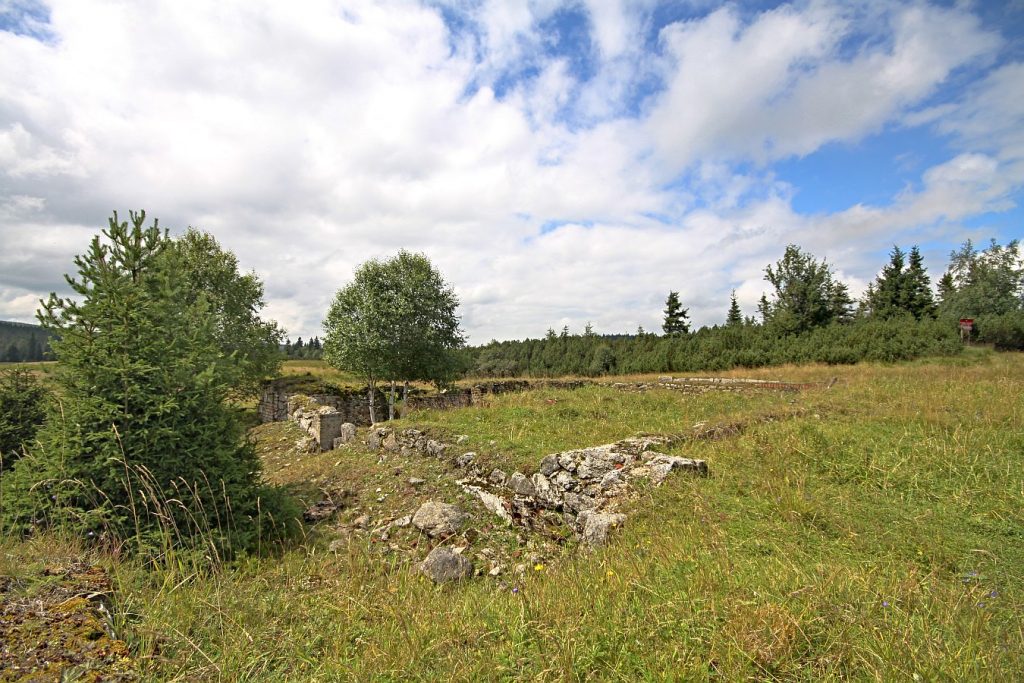 The fate of the Krause family

On July 15, 1921, Julius Erdmann Krause, a forester living at Erlenweg 828 (today’s Zdrojowa Street) in Szklarska Poręba Górna, reported the death of his 80-year-old father, also Erdmann. He rested next to his wife, Auguste, in the Evangelical cemetery in Szklarska Poręba.

Going back to Gustav and Hedwig is unknown whether they had any offspring within 6 years of living together. It is also not known what happened to Gustav after the tragic death of his wife.

However, I came across interesting information – namely the remark about Wilhelm Gustav Krause from Bad Flinsberg, the father of three children, who died on November 29, 1939, in Cieplice Zdrój, the husband of Dorothea Schulze, born on March 24, 1907, in Küstrin.

The question is – is it a coincidence or Hedwig’s younger sister? 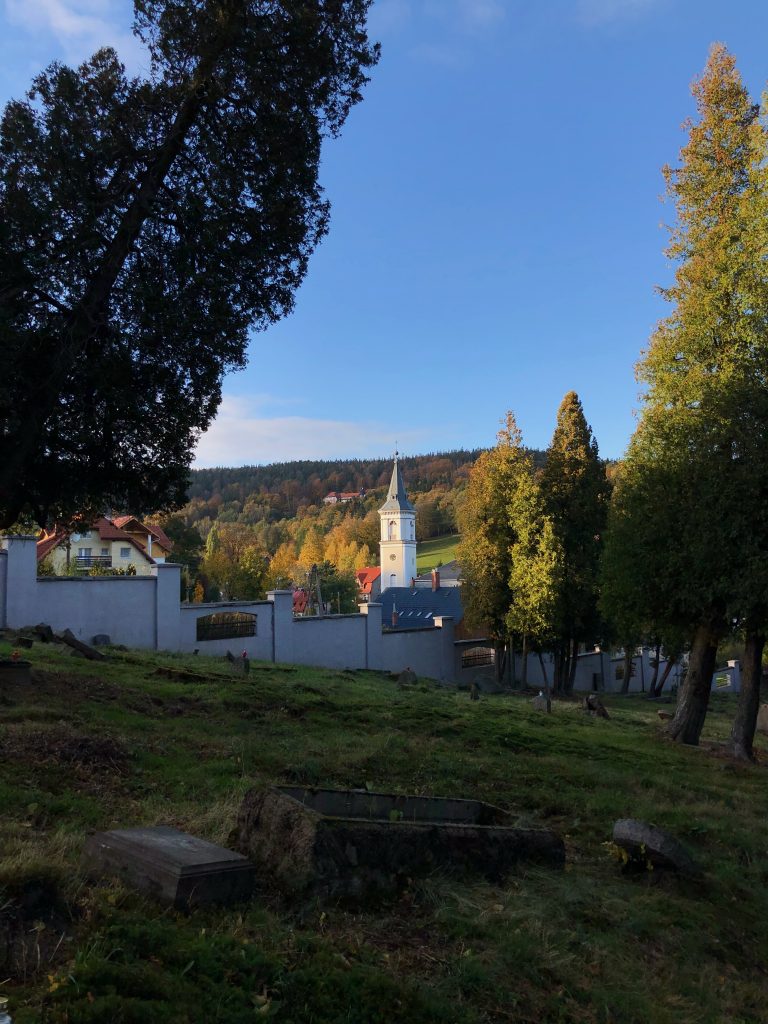