When looking for information in pre-war newspapers on something else, I found an interesting article on the popular at the time the “fake consul” method fraud. I decided to follow the life of one of the victims of that practice, Sara Merlinska, and the central figure of all this commotion – Abram Lejb “Mojsie” Wester. 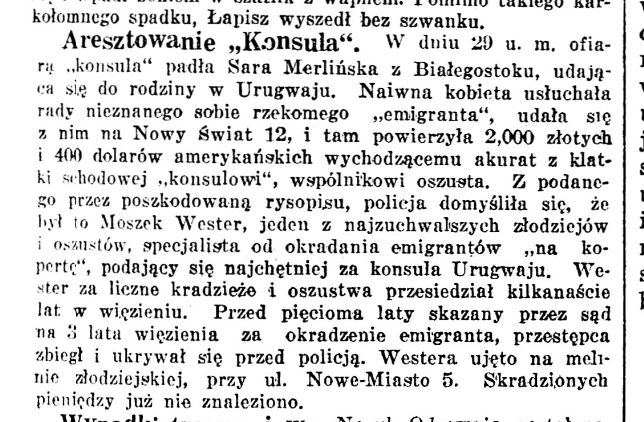 According to an article which appeared in Kurier Warszawski on 7 August 1938, Sara Merlinska, was planning to go to her family in Uruguay. For that purpose, she came from Bialystok for a few of days to Warsaw to get all the formalities done, and she stayed at the “Emigrant House” at Mylna street. In the neighbourhood, she met a man saying he wants to emigrate who told her about the difficulties connected with transporting money abroad and also about a great solution for that.

Namely, at Nowy Swiat 12 there reportedly was the office of the “Foreign Currency Committee” that helped with transporting foreign currencies abroad – of course with 100% guarantee and with no fees. Sara had listened to the obliging stranger and on 29 July 1938 she went to the indicated address. At the staircase, she met the “consul of Uruguay” himself who, after taking 2000 Polish zlotys and 400 American dollars from her, promised to deal with the case as fast as possible.

Unfortunately, it soon turned out that Sara fell victim to fraud, and the man and the money were gone. The woman reported to the police quickly and thanks to the given description, it was possible to establish that Moszek Wester was the fraudster – “one of the boldest thieves and swindlers, specialising in robbing emigrants”.  He was soon arrested in the den of thieves at Nowe Miasto 5. The stolen money was not recovered. 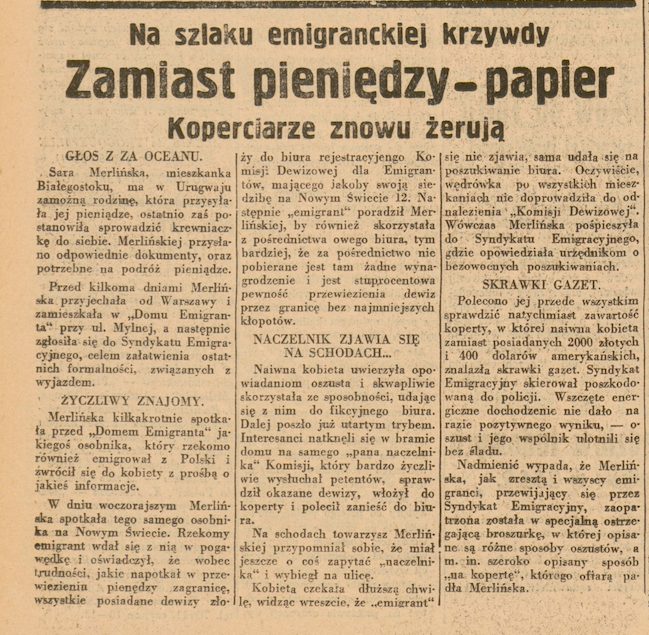 Fortunately, the theft and the fraud did not thwart Sara’s plans. It turned out she set off for Uruguay that same year. On 3 September 1938 she boarded the ship Asturias and sailed from the port in Southampton to Buenos Aires. She was 22 years old and travelled in the company of the 17-year-old Hersz Cyjon in 3rd class.

From Buenos Aires she set off for Montevideo in Uruguay where she joined her family and met her future husband, Leo Conijeski. I managed to find Sara’s tourist card that included her photograph and more specific details. She was born on 10 August 1915 in Bialystok, her parents were Aron Merlinski and Mera née Glatstein. 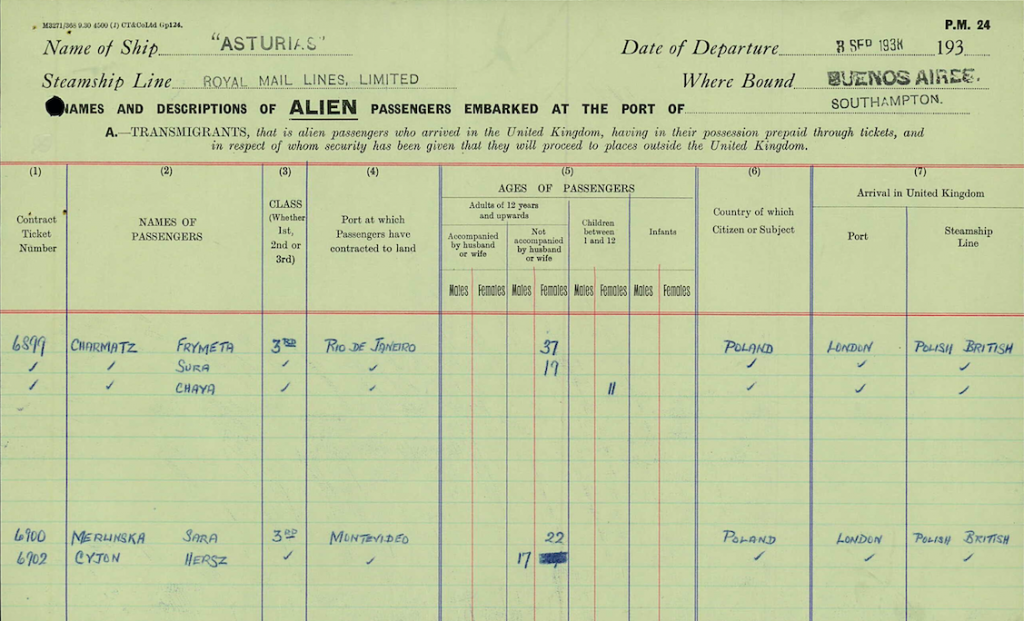 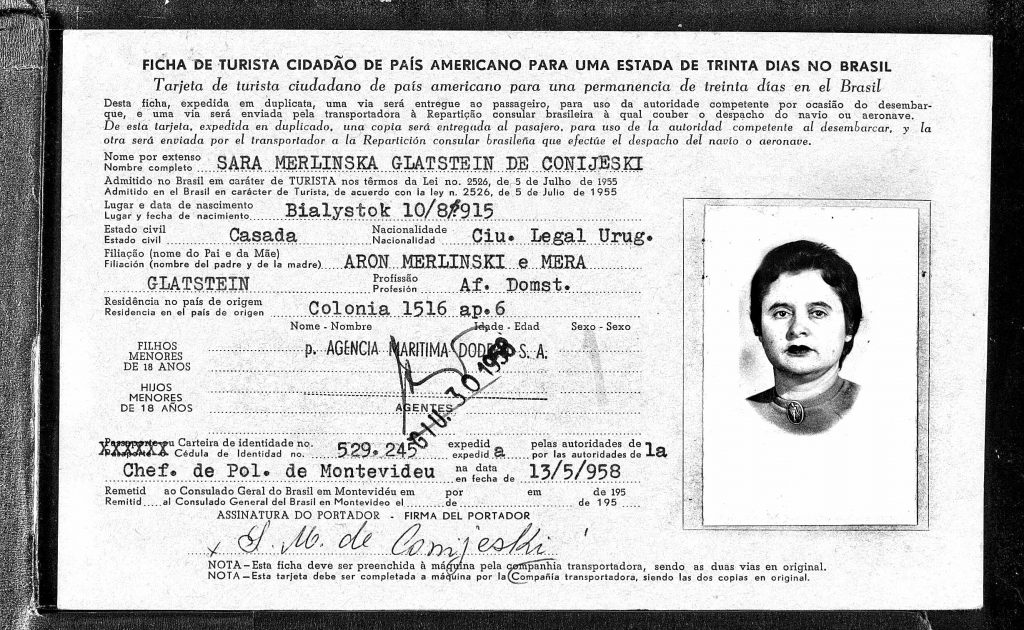 Sara died on 8 March 1983 in Montevideo and was buried on the Jewish cemetery. She had at least one older sister. Dora Slocka née Merlinska was born in Bialystok in 1908 and lived at Kupiecka street no. 17 together with her husband Borys Slocki, a clerk, born in 1906 in Vilnius, and their daughter Lora, born in 1939 in Bialystok. All three of them died during the war. 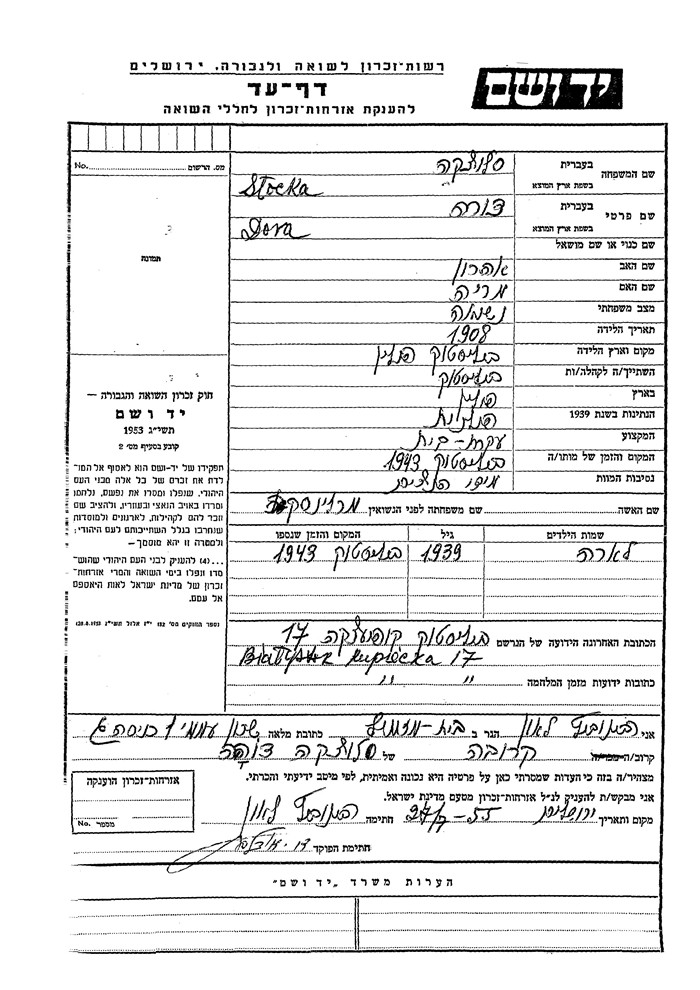 And what about the “consul”?

Wester did not stop at that misdeed. Just under 4 months from deceiving Sara, he was apprehended again. This time as an ambassador he tried to “facilitate the departure” to the United States of Rudolf Rueger. Fortunately, the latter quickly realised that and exposed the criminal who, at that point, had already had a criminal record of 27 “fake consul” frauds. This time he tried himself as an ambassador. 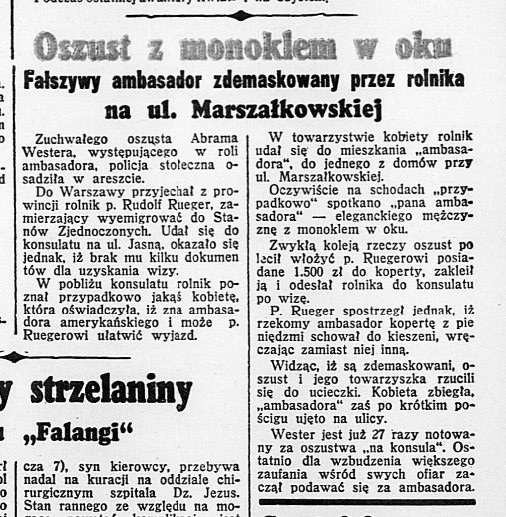 Though I am inclined to believe that Abram and Moszek are the same person, there is also a possibility that they were relatives. Ultimately, the deliberations on that were ended by a personal file from the Investigation Office in Warsaw which not only contained tens of pages of documents on Wester’s frauds, but also the files of genealogical value. Among other things, photographs, a copy of the birth certificate, excerpt from the books of permanent population or indictments.

Abram Lejb Wester, also known under a pseudonym of Mojsie, was born in Szydlowiec on 16 July 1899. His parents were Pinkus Wester and Michla née Kosiorowska. He was baker by profession, but as it was mentioned in one of the indictments, he remained without profession. Abram was 164.5 cm high, his eyes were brown, his hair was dark blond, and his face was elongated. The “den of thieves” mentioned in Kurier Warszawski, which was located at the address of Nowe Miasto no. 5/46, turned out to be Wester’s private flat where he lived together with his wife Estera and four daughters: Sala, Michla, Gucia and Fela.

Wester’s criminal activities were not limited to Warsaw only – he also had criminal record in Lviv, Gdynia and Lodz. The documents also mention the names and addresses of his accomplices, among others Estera Farbiarz, who, taking into consideration her address of residence (Nowe Miasto 5/46) was Abram’s wife. 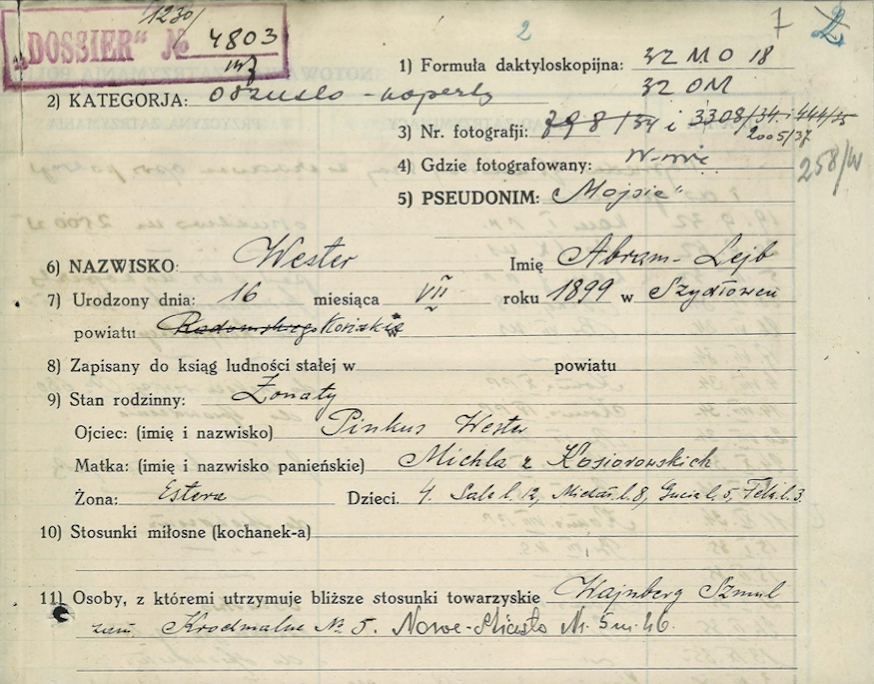 Although a definite majority of charges pertained to the “envelope” method frauds, there was one pertaining to pimping, filed by Basia Zyzia, the daughter of Chaim and Chana, a sex worker, residing in Warsaw at Kopinska street no. 1/69. Abram was said to have promised Basia maintenance and opening a shop together in exchange for 300 Polish zlotys which she earned herself and gave to him. Shortly after that Wester disappeared. 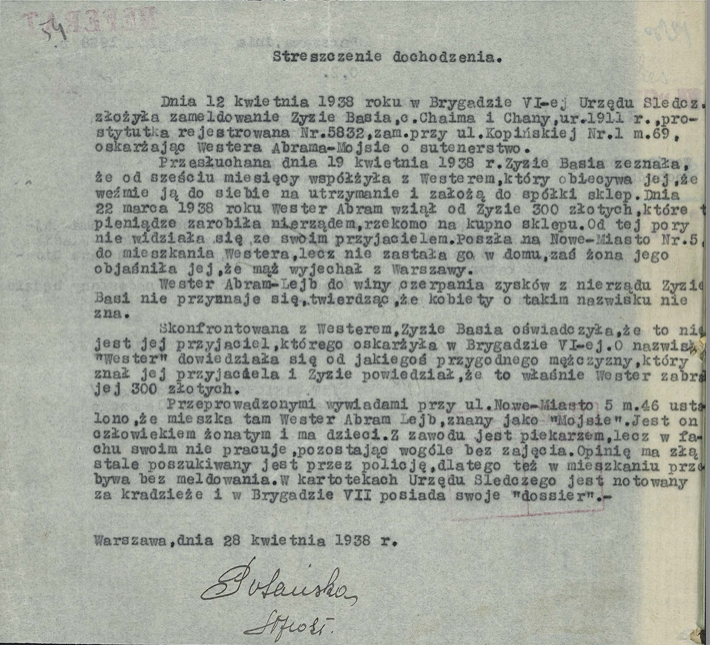 Probably he was arrested for the first time for theft in 1919 and he spent three months in prison then. The last entry in his record comes from 9 August 1940. It is not known if he survived the war, and if he did – whether under his real name or an assumed one…